Three species of seals inhabit the archipelago, harp and bearded being the most numerous. Walrus numbers are recovering (after being hunted close to extinction), they have been internationally protected since 1952 and their numbers have increased to between one and three thousand walruses living in the archipelago.

Minke, humpback and beluga whales are commonly seen around the islands and less commonly orcas and narwhals, with the archipelago being located on the northern edge of their summer range. The archipelago also has a good population of polar bears which is shares with Svalbard.

As with the nature of expedition, the focus is having incredible wildlife experiences along with immersing yourself in the magnificent environments that surround you. All of the itineraries are merely a guide as weather and nature may dictate your journey as you take advantage of your unique surrounds. 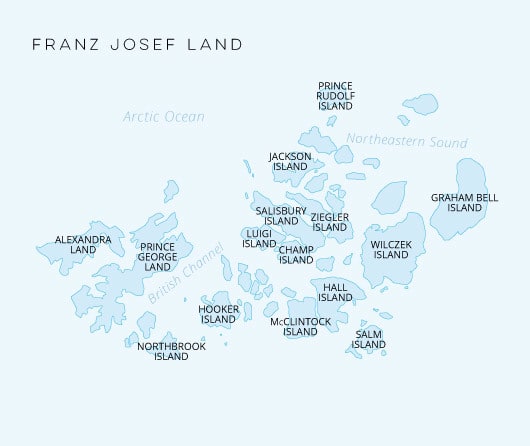 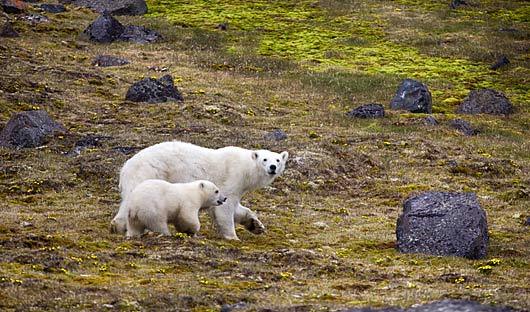 Franz Josef Land is made up of 191 islands and covers an area of 16,134 square km. 85% of the archipelago is covered in glaciers. Here you will find seals, harp being the most common, walrus (although their numbers reduced due to hunting they are now protected), polar bears and Arctic foxes.

There have been forty one species of birds documented in Franz Josef Land which are dominated by seabirds: fulmar, kittiwake, Brünnich’s guillemot, black guillemot and little auk. The common eider, purple sandpiper, Arctic skua, glaucous gull, ivory gull, Arctic tern and snow bunting are also found in the archipelago and nest on the tundra. 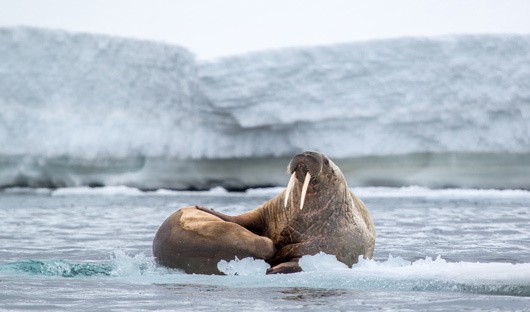 Franz Josef land was discovered in 1865. Many explorer’s spent time here whilst trying to sail to the North Pole, one of the most famous was Nansen on-board the Fram (now housed in a museum in Oslo). For many years the Soviet Union closed off the area to foreign researchers and travellers. The Soviet Union opened up the archipelago for international activities from 1990. 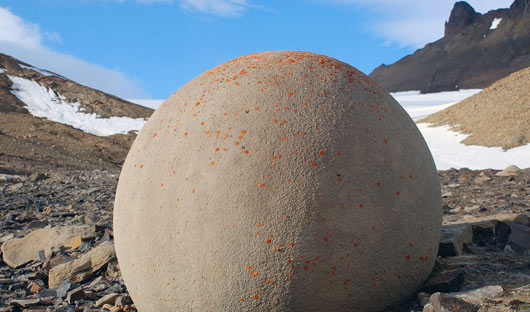 With 85% of the Islands being covered in glaciers it’s the ice that dominates the landscape. However it is the stone spheres found on Champ Island that many geologists long to see. These spheres have many mythical explanations, others claim them to have been left by aliens, and that their high precision and enduring existence in a place virtually devoid of human life means they must be the work of an advanced society. However the existence of the stone balls of Champ Island has a more reasonable explanation is that they are the product of concretion, a process by which the precipitation of mineral cement between the particles in sedimentary rock or soil forms a hard mass.

A SELECTION OF SHIPS 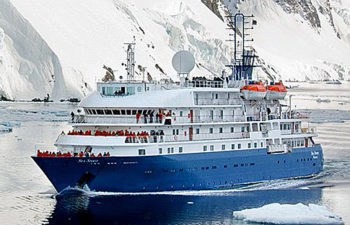 As the name suggests these Antarctic cruise ships are a hybrid of an Expedition Ship and a Luxury Ship. Some are small ships with close to 100 guests and can offer two landings a day and focus on maximising opportunities for exploring as on an expedition vessel but with the added comfort of having larger, more comfortable cabins and common areas. Those with up to 200 guests generally offer one off ship excursion a day (largely due to time factors associated with the IAATO 100 passenger ashore limit) and still have an adventurous soul. Generally cabins are larger or perhaps the ship is newer than an Expedition ship. Meals are a mix of buffet and served courses and the cuisine is of a very high standard.

We’ve chosen to work with two of the best; National Geographic Explorer (148 guests) and the Sea Spirit (114 guests). The experienced expedition team enable you to explore the Spitsbergen with Zodiac dinghies and come home to an exquisite ship with superior comfort and excellent cuisine options. 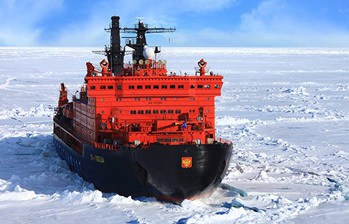 The 50 Years of Victory was until 2016 the most powerful icebreaker in the world.  Despite now being the second most powerful she is perfectly suited to ice-breaking (forcing her way through sea ice up to 3 metres thick) to reach the Top of the World – the North Pole.  50 Years of Victory is powered by 2 nuclear powered engines.  Definitely an Expedition ship.  Her on-board helicopter offer guests incredible flights and views over the ice-choked Barents Sea.  A fleet of zodiacs are used when visiting Franz Josef Land.

Plan My Trip
We will tailor the perfect holiday to suit your needs.
Let's get started
Call us today to discuss your holiday to the High Arctic 1300 668 112